The spirit of the raven 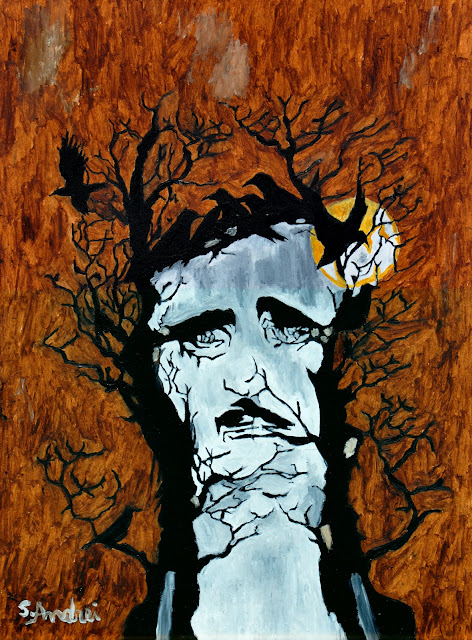 „ The spirit of the raven”
Author's description:
„When tragic events close his horizons,man turns to himself,retreats into his inner forum and shuts the door.There,in the world of parallel mirrors,there is as much light and darkness as he has managed to gather during his short existence.

The tragedies from Edgar Allen Poe"s life the loss of parents at an early age and then the death of his wife--drowned in the forgotten nectar, induced him a sick connection with the most abysmal areas of the psyche,making him a study object for psychoanalysts.
A brilliant man of culture endowed with an uncommon imagination, accompanied by hypersensitivity and a remarcable power of creation, the novelist,the literary critic,and last but not least ,the poet Edgar Allan Poe became the forerunner of the fantastic science fiction literature in the first half of the 19th century.

Gothic by excellence and romantic in essence,he approached the  darkest themes,in accordance with his gloomy and solitary existence.A vivid expression of suffering he experimented the tragedy of human existence led to paroxism,prefiguring the drama of modern man alienated by his own self .The dual personality,as a consequence of the internal lack of balance,is the theme of this work ,inspired by Edgar Allan Poe's fascinating  personality.
A grey spot of sky embraced by the dry silhouettes of two tall, leafless trees,on whose twigs a flock of ravens temporarily popped,represents,in my vision,the illusory portrait of the artist,transposed into the language of visual art.

Knowing since my boyhood his literary works,and empathizing with his tragic destiny,--which every true artist reiterates in the way of his affirmation--I only now understood the profound meaning from the end of the poem "The Raven":  " Is there,is these balm in Gilead? "
The answer comes only after the artist's death,  when his  work, sublime expression of suffering and sacrifice raised to the rank of art,receives the confirmation of value from several generations. Unfortunately,for the artist may be too late..." 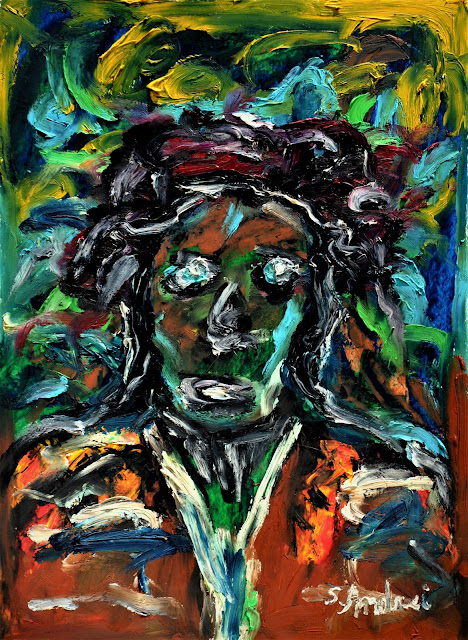 „Mark Zuckerberg Product”
Author's description:
Mark Zuckerberg,the supreme god of  superficial,immoral and non-intellectual paradise,has created this world probably thinking that thus ,all the people  will have a common home at the same time.
I was thinking of Facebook Sapiens, it's a human subspecies with artificial intelligence, a ravaged beast, a naked eye and a fixed look that finds no place in the real world from which it was created by the "modern god" of the current age ...

Mark Zuckerberg,the supreme god of  superficial,immoral and non-intellectual paradise,has created this world probably thinking that thus ,all the people  will have a common home at the same time...
Thinking point, hit point! and he succeeded. I'm the prototype of Lucifer, the man in the beautiful story ..., I'm one of those who turns against the creator who left an accidental world and ran away from the scene.
No, I'm not a zombie, and I live, not just exist, and I exist, not just persist, I think, not just look, in this world.

This painting can be the portrait in the mirror of anyone who gets caught up by the internet addiction,not understanding that the refuge from reality  into a virtual space is,in fact,a form of alienation of the modern man.

I conceived this artwork with the thought of human vulnerability in the face of the temptations offered by so-called "socialization" platforms. The most popular of them,Facebook,has become a kind of parallel universe that transforms people into some mechanical beings that behave such as lifeless zombies without feelings or moral values.
They live teleghidated, without their own life, their real existence. They replicate the same actions every day, without realizing that while they live inside this virtual dimension, they actually die outside.

During this time nature, although affected by the accelerated process of change, continues its course, creating harmony around us in the hope that we will enjoy its presence.It captures the cosmic energies and sustains our lives with them,while for us is no longer important,except for its accelerated  destruction,in order to assure a mechanic comfort meant to transform us into lean and  lanky creatures lying in front of a screen,of an image,like a tree that cannot move because of its roots.

From time to time, when we manage to get out of this common block called Facebook, we feel for a few moments that we really live. But only for a little while. Even there, in the middle of nature, we prefer to nourish our psyche, soul, breathing in an imaginary, superficial world with selfish people, just as zombies as we are...

Introverted and apathetic in the real world, we indulge in this psychological slaughterhouse in which we devour each other, feeding us with pseudoculture, in a world where lack of values ​​and morality transform us into a kind of hybrids between man and animal wildly ferocious. Always on the watch,we spy each other , fumbling each other's ideas and slandering each others, in a phychological game that is similar to the war of the world  from beyond the life.

Anchored in this virtual world, mostly populated by people who hide their identity under fictitious profiles, among all sorts of "viruses," we often feed our daily existence with illusions, a food rich in immoral proteins, superficiality, hypocrisy and selfishness, feed our dreams when our consciousness sleeps in the real world.

We remain captives as in a cage in a mediocre, superficial communion that makes us incapable of evolution, breaks us from all points of view as race, morality, as truly important values. We lose our identity, we waste our lives and we we play a real existence game where man's harmony with nature, with life and fellowship was really important in the evolution of our species, suppose advanced on this planet ...

I sometimes think of what big goal will remain when Facebook loses its glory and it will disappear. For many it will be like an apocalypse like the disappearance of a parallel world. It will be like a balloon of "oxygen" that breaks, taking illusions with it But let us see what this huge gap will fill, hopefully our evolution of subspecies will not follow in a more modern cage, better developed and comfortable for these telegraphed zombies

Do you remember how your life was before facebook - what were your activities, and what role did nature have in everything that life represented for your real existence ...?
You remember ... but ... or maybe ...
May be!

The Emblem of Japan 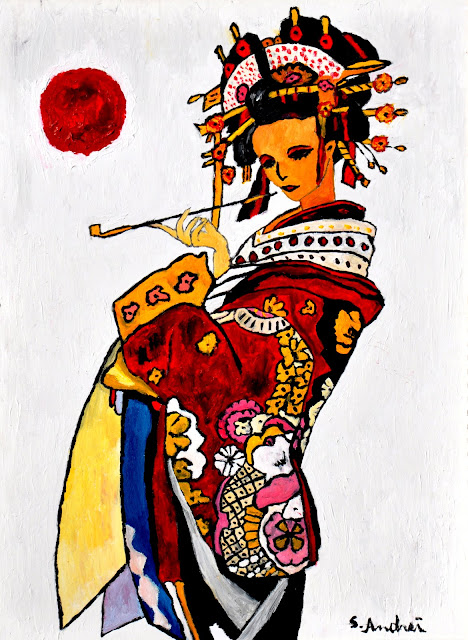 „ The Emblem of Japan”
Author's description:
„The emblematic figure of the country of the sun rises, Geisha is a prototype of femininity specific to a particular cultural tradition.
These young ladies are the living illustration of the gentleness and behavioral refinement at the top of the art.

"Geisha" means "a person of the arts", a dancer and interpreter of Japanese art traditions. "Geisha" cultural center was and remains Kyoto, where the training of geishas is four centuries old.
Between a child with almond-black eyes, wide open to an overwhelming reality, and the self-confident geiko, trained to create harmonious and refined pleasures around her, the road is long and involves going through several stages. A continuous glimpse of the spirit, rituals and changes in dress style and behavior until perfection.
The more Geisha is experienced,the more sober she is,the more gentle,the more graceful ,and she tends towards an elegance that favors everything...and body and spirit.

Geisha's iconic value for Japanese culture can only be understood in the general social context based on the Bushido Code, dubbed "the soul of Japan" or "the way of the samurai."
The synthesis between shintoism, confucianism and buddhism, the code of honor is based on a certain philosophy of life, about the law of karma. A solid society built on the eight virtues: the spirit of justice, the heroic courage, kindness and compassion, respect, integrity, honor, duty and loyalty and, of course, self-control.
In this context, the personality of Geisha appears as a tribute to the eternal feminine, meant to give meaning and charm to an otherwise austere existence.
Because Geisha is a national emblem of Japan, it seemed appropriate for me to join her the national flag of this country."

If you want to support this Artist.

Search on this blog